Germination is a critical step in plant growth, and simply speaking the young plant must pass two obstacles, first it must leave the seed, and second it must emerge from the soil. Only then the plant can grow successfully and deliver yield. Therefore, testing seedling emergence is a common practice to evaluate seed quality. We at LemnaTec can address this task with imaging and image processing, as we recognize plants emerging from the substrate, count, and measure them so that we provide data sets on emergence rates together with measures for the plant growth.
In a pilot study, we compared seeds of the fiber hemp cultivars Finola and Fedora, and as phenotypically fiber hemp and medically used hemp plants are highly similar, the method also works for medical cannabis. After placing 15 seeds in soil filled trays, we imaged these trays regularly until plants had emerged and started growing. Our image processing software analyzed each image to recognize when and where plants came out of the soil and measured their size. With the time series, growth of emerged plants was recorded. 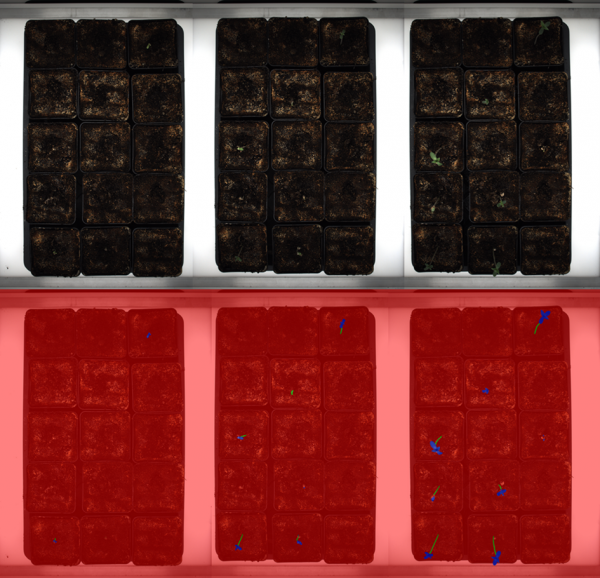 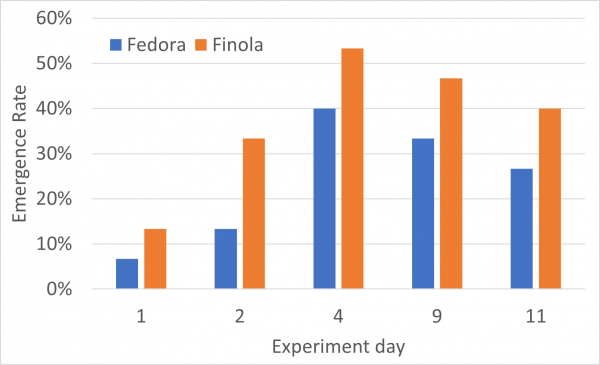 Our image processing software recognized plants individually and followed their growth in subsequent images. The software is robust so that it copes with inhomogeneous backgrounds, e.g. caused by the soil, including surficial drying of soil parts. All soil, pot, tray, or bottom plate material is recognized as background (red mark). With advanced image processing, we can recognize single parts of plants, here in the example leaves (blue mark) and stems (green mark) were marked separately.
The first data type of interest is the germination rate, or emergence rate, i.e. the number of plants growing out of the soil substrate and becoming visible. In the time series, we can follow up how many plants were present at each observation time. In the examples, the last observation day was 11 days later than the first one. The seeds that were used did not germinate well. Barely half of the seeds led to plants that came out of the soil, and there were substantial time delays in emergence. Moreover, some seedlings emerged but died back later, so that emergence percentages even decreased in the later days of the experiment.

So far, values are same as human inspectors could generate, i.e. they can count emerged seedlings and document when they appear. Human inspectors can also record whether seedlings are large or small, for instance by semantic descriptions. What human inspectors cannot do, or would take enormous time, is measuring the size of the seedlings in order to figure out how large or small they are. It is obvious that holding rulers at each leaf is laborious and works for a few seedlings, but does not work if there are hundreds or thousands of seedlings to inspect.
Using the LemnaTec phenotyping software, numerical values on seedling size are recorded in one step together with the seedling detection and count. In the example, leaf area is analyzed for each emerged seedling, so that seedling sizes can be compared, within groups or among groups. Here, seedlings of the cultivar Finola were smaller compared to those of Fedora. However in both groups were strong variabilities, mainly due to inhomogeneous time-shifted emergence of the seedlings. A numerical assessment of the intra- and inter-group variability in seedling growth provides detailed insight in the early-stage development, going far beyond what visual inspections can deliver. 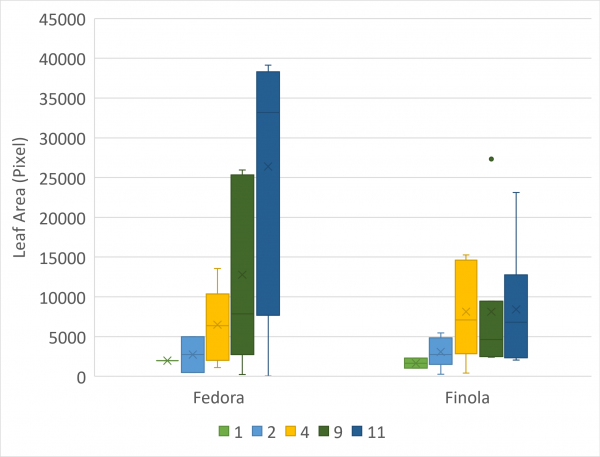 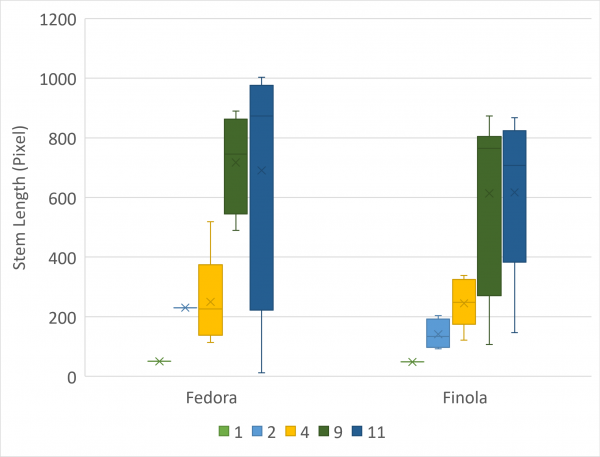 Having the stems recognized separately from the leaves, the LemnaTec software can deliver data on stem length, too. Under the given growth conditions, Finola seedlings had shorter stems than the Fedora seedlings. This improves growth stability. In turn, the strongly elongated Fedora stems tend to tip over resulting in seedling lodging especially at the later stages.
LemnaTec analytical software provides various parameters on the plant material that enable comprehensive analyses. Beyond the standard parameters, we offer customer-specific algorithm training delivering data that is tailor-made for the intended analyses.