In this tutorial I am going to show you how to use Image Object Smoothing, an image object manipulation tool that is helpful to refine shapes. Especially I will demonstrate how to use this tool in context of determining region of interests (ROIs) in a dynamic way. For example, instead of using fixed size geometric shapes as static ROIs to determine vessels in a multi well plate, I will show you how to do it in a dynamically.

For motility analysis of small organisms I occasionally need to use the dark field imaging setup. In dark field illumination, a sample contrast comes from light scattered by the sample itself, while in a bright field illumination setup, the contrast comes from absorbance of light in the sample. A multi well plate is placed on an imaging field with backlight covered by a regular array of black discs, where each superimposes with each well of a plate. The light coming from the side of the vessels’ walls shine indirectly onto the object. This setup is particularly useful, if your object is translucent, e.g. nematode. Depending on how the plate is positioned in the imaging field there can be slight variation of the vessels coordinate, as well as the black background shape or the pattern of light. Fixed sized discs as static region of interests can fail to find plate vessels. Therefore we require a dynamic method that utilises lighting pattern seen in the imaged plate. 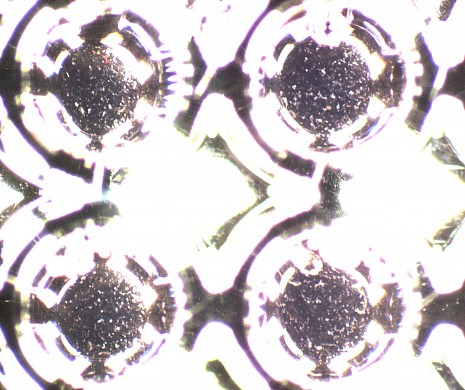 By analysing an imaged tile of the whole multi well plate, we see that there is a certain pattern that we can utilise to define the position and shape of our ROI, i.e. the white background surrounding each well at positions NW, NE, SW, and SE.

I use Fore/Background Separation (foreground=white, radius=1) to segment the image. Using a combination of Multi step Morphological and Fill Areas, I remove small foreground shapes within vessel’s area. The four vessel borders are now used to ‘carve’ the shape of a vesssel; for that I use Multi Step Morphological and dilate the shape of the foreground until the borders touch. Notice dilation with a high factor (I used 40) produces an edgy foreground shape and the vessel now looks either like a diamond- or box-like shape. We invert the image mask and convert it into a list of objects (Universal Converter) in order to smooth the shape. Image Object Smoothing uses Fourier Transformation to alter the shape of objects. Two options are available to control smoothing: a) number of absolute coefficients, and b) number of relative coefficients. Here is an excerpt from the technical description:

“The difference between both options is […] [b]ig objects generally have more coefficients describing the boundary line,

Below are some images showing the performance in finding vessels as dynamic ROIs. 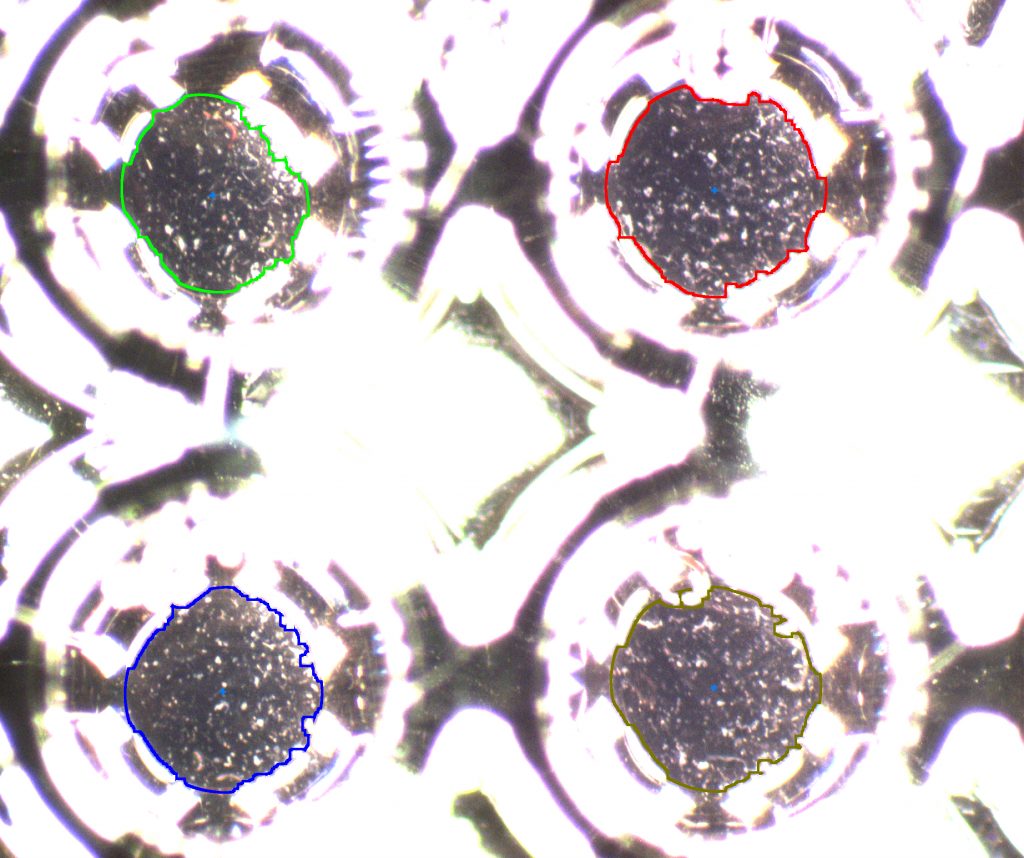 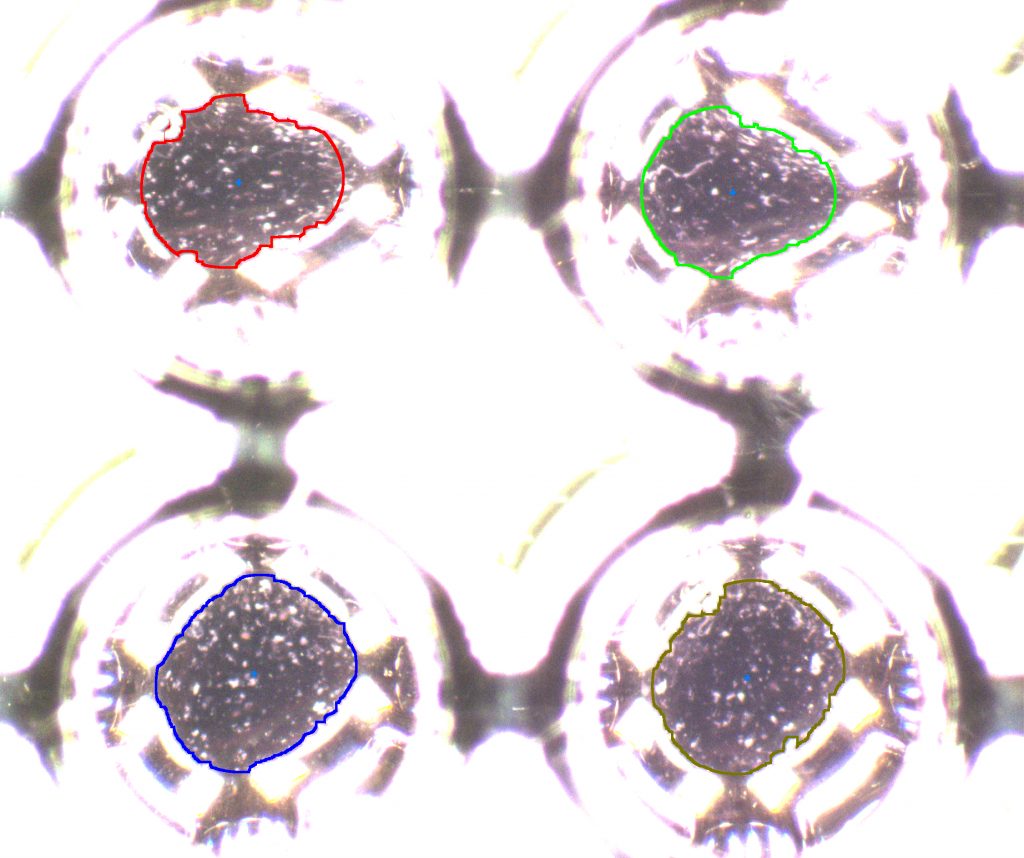 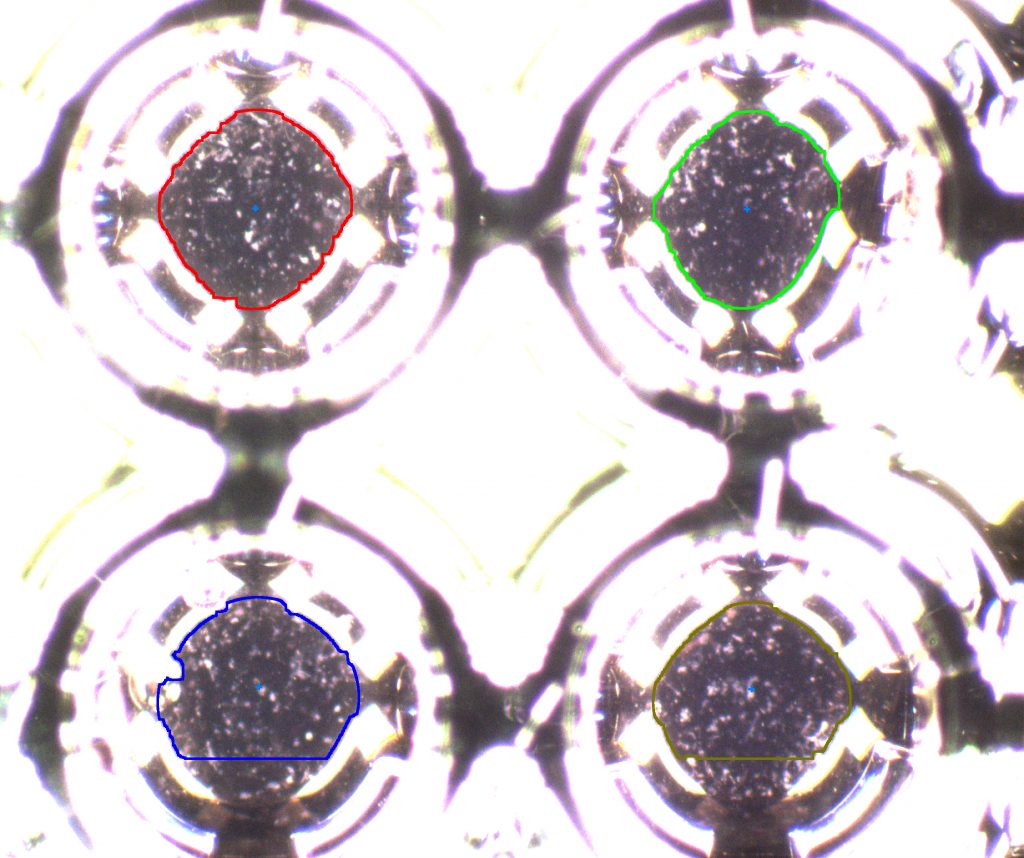 Here is a plot with a distribution of compactness of the detected ROIs from a 384 well plate: 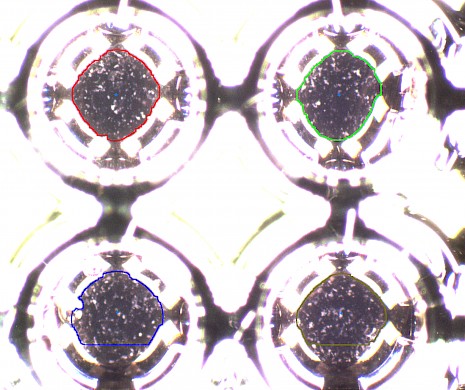 We have shown that Image Object Smoothing can be used to dynamically detect region of interests.