Herbs, also referred to as microgreens, are traditionally used as spices for cooking, and they frequently contain health-promoting substances. When growing them in controlled environments such as greenhouses and particular indoor farms or vertical farms, electrical illumination is required as light source. It is well-known that light not only drives photosynthesis and thus growth, but has many signaling functions in plant physiology, depending on light quantity and quality. Advanced LED technology can help to promote physiological responses of the plants towards production of adequate amounts of healthy compounds in the leaves.

Romanian researchers tested LED technology to modulate light quality so that the production of health-promoting compounds was enhanced in basil plants. They tested effects of red and green light on different cultivars. A LemnaTec Lab Scanalyzer served to monitor growth dynamics of the plants during the experiments. The growth phenotyping data proved that all tested light treatments enabled proper vegetative growth of the plants, whereas higher fractions of blue light slightly enhanced growth compared to the other treatments. For the production of health-promoting substances, light treatments had differential and cultivar-specific effects. All treatments with elevated red or blue light promoted the free radical scavenging capacity compared to white light-grown plants. 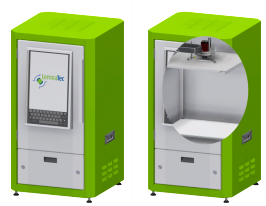