For plants, roots are as important as shoots are. However, in most cases they are below ground, and thus they are not visible to humans. When considering the plant’s properties, frequently roots are neglected. Despite this, it becomes increasingly important to analyze not only the aerial parts of the plant, but also the roots.

To overcome invisibility, various technologies have been developed. Here we show the analysis of roots in soil-filled rhizoboxes that have one transparent plate where the roots can be seen. These boxes combine the advantage of a soil environment with the possibility to take normal RGB or greyscale images. Thus, imaging does not require complex technologies such as x-ray or other tomographic technologies.

Rhizobox imaging in the LemnaTec PhenoAIxpert results in photographs that show roots growing along the transparent plate. The technology is available for the manually operated PhenoAIxpert Pro and for the automated PhenoAIxpert HT. Regardless of whether you use automation or not, all images are processed with our LemnaGrid software package that delivers a range of factors relating to root properties. 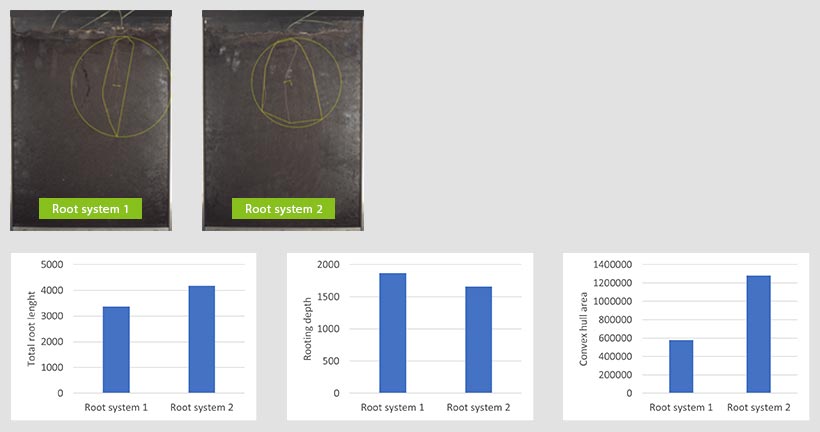 In root system 1 (RS1), two roots were visible along the transparent plate, and three roots were visible in root system 2 (RS2). The total root length of RS2 (4200 pixel) was higher than that of RS1 (3300 pixel). Thus, there were approximately 20% more roots in RS2 compared to RS1. As visible with the enclosing circle diameter, the overall rooting depth was deeper in RS1 compared to RS2. RS1 reached approximately 12% deeper into the soil than RS2 did. The largest differences among the three plants were in the fraction of soil covered by the root systems, represented by the convex hull area. Here, RS2 spanned double the area compared to what RS1 did. With such factors, numerical characterizations of soil-grown root systems are enabled in a non-destructive way. Artificial intelligence-based image processing allows addressing a broad range of user-defined factors to extract root features from rhizobox images. With such imaging and image processing capabilities LemnaTec PhenoAIxpert technology is at the forefront of root phenotyping for research and breeding purposes. Technology is not only available for the automated PhenoAIxpert HT, but also for the manually operated PhenoAIxpert Pro.