LemnaGrid is a platform for image processing and analysis. It uses Ipp, opencv, and other libraries as backend along with propriatory algorithms and provides graphical interface to the user to access a wide range of useful tools. The functionality of LemnaGrid can be extended interacting with external image processing applications. In this short post I am going to show how three different external programs (ImageMagick, ImageJ, R/EBImage) can be embedded into the LemnaGrid workflow to perform fast fourier transform (FFT). 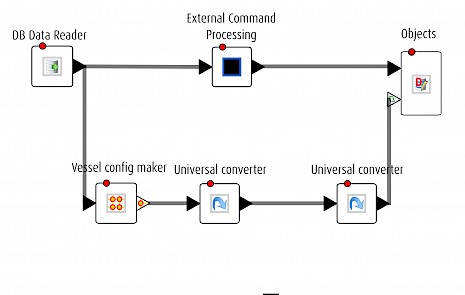 The External Command Processing device is the LemnaGrid tool to communicate with foreign applications.

Briefly this is accomplished in three steps:-

However if your favorite tool uses a different syntax, then you can create a .bat file and customise the command line parameters accordingly.

where convert is a command line tool from the ImageMagick software suite. 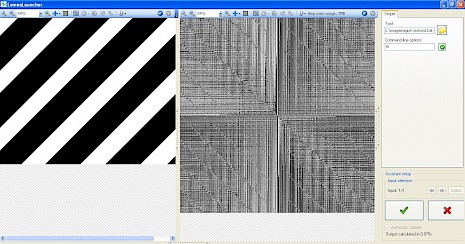 ImageMagick is a free and open-source software suite to create, edit, compose, or convert bimap images. Here I want to apply the fast fourier transform (fft) function and process the phase output image. I downloaded ImageMagick from blog.astrophotographytargets.com/2012/03/imagemagick-with-fftw-delegate-library-on-windoes and installed it in C:/imagemagick. Next I created and tested a batch script (C:\imagemagick\extcmd.bat) to call the fft function from ImageMagick:

With the sample image “stripes.bmp” I tested the batch script in the DOS terminal:

Now it is time to call ImageMagick from LemnaGrid. First I loaded an input image with DBReader, and then I connect it with the External Image Processing device. I set the tool path to C:\imagemagick\exctcmd.bat, and typed “-fft” as command line option.

ImageJ is a public domain, Java-based image processing program developed at the National Institutes of Health. ImageJ was downloaded from rsb.info.nih.gov/ij/download.html and I installed it under C:\ImageJ. Next I created an ImageJ macro file (C:\ImageJextcmd.ijm):

Again I tested everything from the DOS terminal first before deploying it in LemnaGrid:

The corresponding settings in External Image Processing are:- 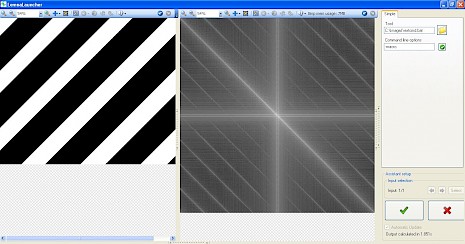 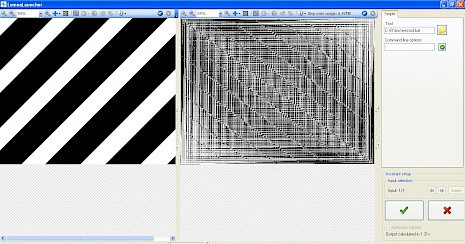 R is a free software programming language and software environment for statistical computing and graphics. EBImage is an R package with general purpose functionality for processing and analysis of images in context of microscopy based cellular assays. I downloaded R from cran.r-project.org/bin/windows/base and installed it under C:\R. Next I installed the EBImage package by following the instructions from bioconductor (bioconductor.org/packages/release/bioc/html/EBImage.html). Then I developed and tested my R script (C:\R\extcmd.R):

The call to this R script is done with this .bat file (C:\R\extcmd.bat) :

Notice, I did not find out how to save an image as .bmp in R, so in the .bat file I had to do a file format conversion with ImageMagick. The R workflow was tested in the DOS terminal:

The corresponding settings in External Image Processing device are:-

If you want to use your own magic box within the LemnaGrid framework, then you use the External Image Processing device. Here I have listed three different command line based applications that integrate with LemnaGrid.